Facebook CEO Mark Zuckerberg’s security costs alone accounted for half of the titans’ total at more than $23 million. Costs rose even as CEOs shifted to home offices.

Corporate security programs are used to dealing with a litany of threats from kidnapping to cyberattacks, but 2020 had a new kind of peril: a pandemic. Stay-at-home orders may have cut down on travel expenses, but a Protocol analysis of executive security costs in the tech industry shows that companies like Facebook, Google and Apple all ended up paying more for personal security in 2020 due to the pandemic than in previous years.

“It is 100% my belief that part of our protection is protecting the health of our clients,” said World Protection Group’s Kent Moyer, who manages security for high net-worth individuals and tech clients. He said his clients faced an increased number of threats in 2020, and believed the pandemic and self-isolation played a role in their rise. “If someone was a little bit wacky, they became a lot wacky,” he said.

Facebook said it spent more to protect its executives as a result of new COVID-19 security protocols and for increased security during the election. CEO Mark Zuckerberg’s security budget swelled from $20.4 million in 2019 to $23.4 million in 2020, the largest amount spent among major tech executives, according to a Protocol analysis of SEC filings. The social network executive receives a flat $10 million yearly stipend for personal security, and the company spent an additional $13.4 million for his security in 2020. Facebook COO Sheryl Sandberg is also one of the most costly to protect at over $7.6 million last year.

With executives working remotely, companies also had to pay more to outfit their home offices to match the security that they would receive at the office. Uber, for example, paid over $120,000 in home office improvements for CEO Dara Khosrowshahi and assigned a security specialist specifically to his home.

Lyft President John Zimmer also climbed the charts and became one of the most costly tech executives to protect. His security now costs the ride-hailing company over $2 million a year, while CEO Logan Green’s annual budget is nearly $600,000. (Lyft didn’t respond to requests for comment on Zimmer’s increased security costs.)

The Cost of Keeping the Boss Safe

Personal security costs disclosed in company filings ballooned for many top tech executives in 2020 as the pandemic set in. Some chiefs saw costs decrease, however, as the crisis grounded most business travel. 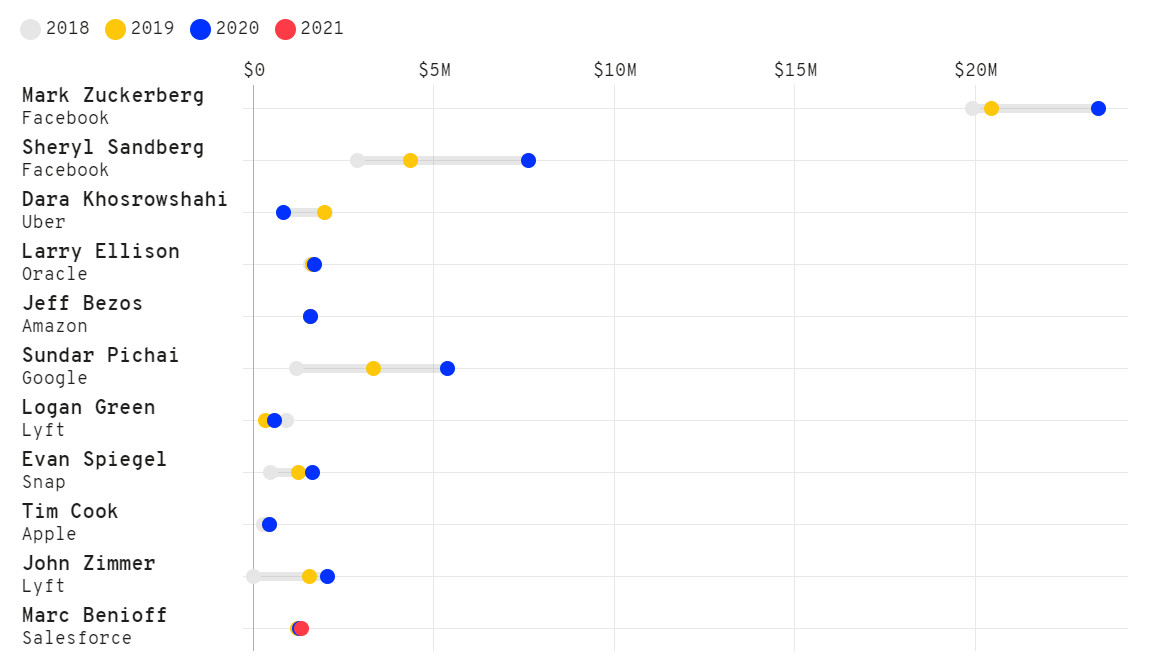 Note: Salesforce’s figures are for its fiscal years, which end in January. Salesforce and Lyft did not respond to requests for comment.

Other companies introduced new security measures. As Zoom’s spotlight grew, Zoom paid out over $600,000 in personal security for its CEO Eric Yuan. Amazon’s Andy Jassy, who would take over as CEO in 2021, also had security costs listed for the first time: $30,831 for 2020.

Not every company saw a bump in costs. Amazon continues to pay a flat $1.6 million a year for founder Jeff Bezos’ security, and he covers the rest. Microsoft doesn’t disclose any security costs since its executives pay for their own.

“If an executive has a bodyguard, or a chauffeur who acts as a bodyguard who accompanies them when they’re out on official company business, that wouldn’t tend to get disclosed,” said Compensia’s Mark Borges. “What happens though is usually the security measures are 24/7, so there’s a chunk that is considered a personal expense because it’s tied to activities, places or time when the executive supposedly is not on duty or involved in performing their role as executive for the company.”

The executive compensation firm found in 2015 that only 7.5% of Bay Area tech companies disclosed protection costs, but Borges said he believes that it’s become more commonplace as tech companies become more valuable and the name recognition of CEOs grows. For example, Facebook justifies its security costs for Zuckerberg because of his public recognition. “We believe that Mr. Zuckerberg’s role puts him in a unique position: He is synonymous with Facebook and, as a result, negative sentiment regarding our company is directly associated with, and often transferred to, Mr. Zuckerberg,” the company says in its filing. (Full disclosure: The author’s husband works for Facebook.)

With companies providing at-home security for an executive suite now working from home, Borges thinks the costs may continue to rise.

Stay-at-home orders may have cut some of the costs, as Moyer said his international travel team was effectively grounded as both business and personal travel abroad was halted. But his residential team was active in protecting homes, now that the workplace moved into the living room. His team also spent a lot of time beefing up home security measures against both physical attacks and cyber threats. They installed new home security systems, revamped safe rooms and have a staff of drone pilots to map and protect sprawling estates.

Part of the increase in security costs was also just protecting the executives from the threat of COVID-19 by enforcing protocols. Instead of traveling alongside clients in jets or in cars, some opted to have their protection trail in a “chase car” so that they weren’t in enclosed spaces together.

Similar to what was disclosed by the tech companies in filings, Moyer says his firm’s revenue went up in the year. It’s hard to tell though how much of the increase is a byproduct of the pandemic versus the growing profile (and notoriety) of executives, he said.

“There’s a lot of concern that these high-profile executives can be targets of terrorists or kidnappers or other ne’er-do-wells, and the company has a vested interest in protecting them and allowing them to perform their duties without having to worry about their own personal safety,” Moyer said.

Billionaires don’t have time to create their privacy. We do it for them.
Scroll to top